You probably wouldn’t expect to find a 390-million-year-old fish-like creature with four limbs in your family tree.

But a new study shows that the creature, called Palaeospondylus gunni, could have been one of our earliest ancestors.

Fossils of the eel-like creature are abundant in Caithness, Scotland, and were first discovered there in 1890.

Experts have since found it difficult to place it on the evolutionary tree, as Palaeospondylus was about two inches (5 cm) long, making reconstructing the skull difficult.

Now, Shigeru Kuratani of the RIKEN Leading Research Group in Japan has discovered evidence that the creature had a jaw and four limbs.

The results place the animal at the bottom of the vertebrate family tree – including humans.

Palaeospondylus gunni is an ancient vertebrate that scientists believe could have been one of the oldest ancestors of four-legged creatures — including humans. Pictured: Reconstruction of the Palaeospondylus by X-ray tomography 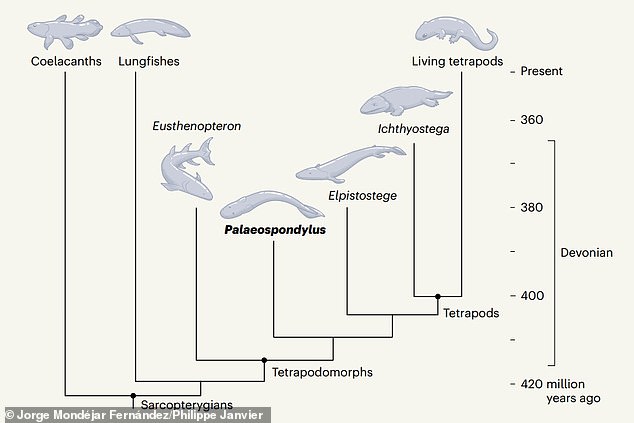 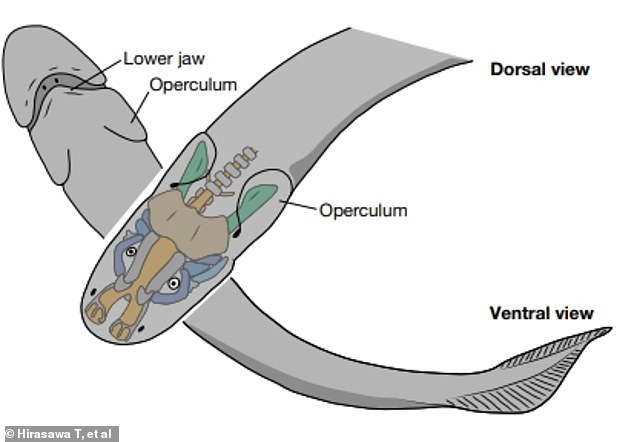 Prior to these new discoveries, the creature was thought to share features with both jawed and jawless fish.

Palaeospondylus gunni is an ancient vertebrate with a flat head and eel-like body that lived on the bottom of a deep freshwater lake.

They feed on leaves, animal remains, and other organic debris that has fallen to the bottom from surrounding terrestrial communities.

It dates back to 390 million years ago, when the first vertebrates began making their way out of the water.

For these pioneer fish, the adaptation of the fins in the limbs facilitated the transition – which later gave rise to mammals, birds and reptiles.

Until now, the creature was thought to share features with both jawed and jawless fish.

No fossils have been discovered indicating that Palaeospondylus – which lived in the Devonian period about 390 million years ago – had teeth or leathery bones.

The creature had a flat head resembling the body of a sea serpent and lived on the bottom of a freshwater lake in the far northeast of the Highlands.

He had a strange basket-like apparatus on his nose and a well-developed cartilaginous spine – but no visible fins.

The researchers found that Palaeospondylus was likely a member of Sarcopterygii, a group of lobe-finned fish, due to its cartilaginous skeleton and absence of paired appendages.

The marine organism feeds on leaves, animal remains, and other organic debris that has fallen to the bottom of the lake from the surrounding land.

At that time, the landmass of Scotland was south of the equator, where Central Africa is today, so the environment was hot and semi-arid.

The history of Palaeopondylus dates back to a crucial point in history, when the first vertebrates began making their way out of the water.

The adaptation of their fins to the limbs facilitated the transition – which later gave rise to mammals, birds and reptiles.

Researchers at RIKEN used X-rays from the SPring-8 synchrotron to generate high-resolution micro-CT images of the fish.

Coratani and his team carefully selected the fossils, with the heads completely embedded in the rock, to obtain the most accurate image of the skull.

Lead author Tatsuya Hirasawa of the University of Tokyo said: “Selecting the best specimens for CT scans and trimming the rocks surrounding the fossilized skull allowed us to improve the accuracy of the scans.

“Although these preparations are not fully advanced technology, they were certainly keys to our achievement.” 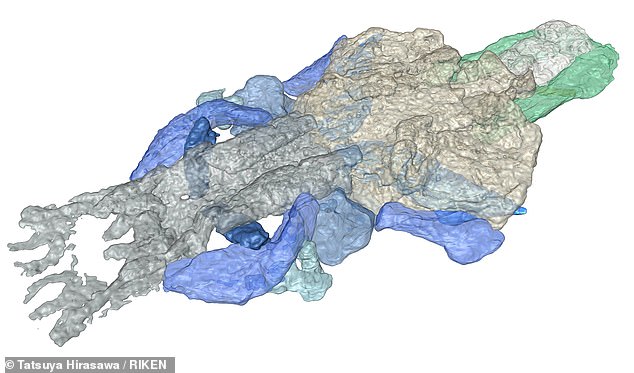 Images created from Palaeospondylus fossils show that he had a flat head, eel-like body, a basket-like organ on his nose, and a cartilaginous spine

Scientists found three semicircular canals that confirmed that the creature likely had a jaw.

Hirasawa added: “As a tetrapod, Palaeospondylus has a lower jaw that is too small for the skull and the mouth opening has been retracted.

This appears in a group of amphibians living today called caecilians.

The “retracted” jaw, along with the unusually flat head shape, likely represented an adaptation to a bottom-dwelling habitat because it allowed suction feeding.

The researchers also discovered the craniofacial features that placed Palaeospondylus in the quadrupedal category. 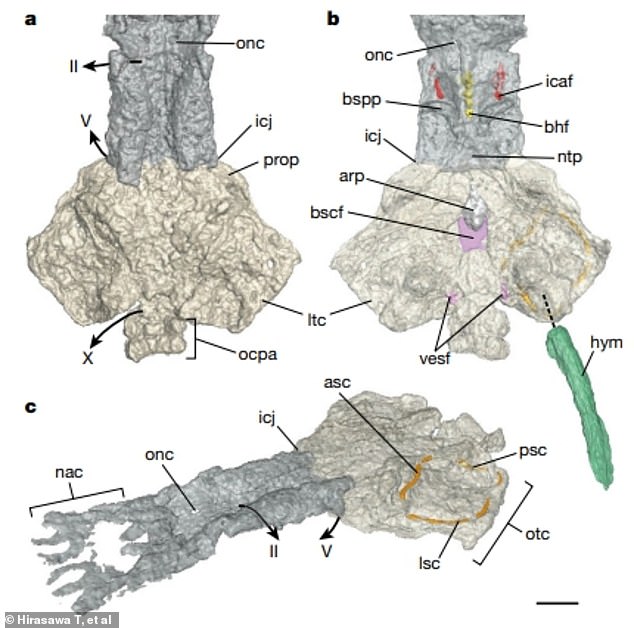 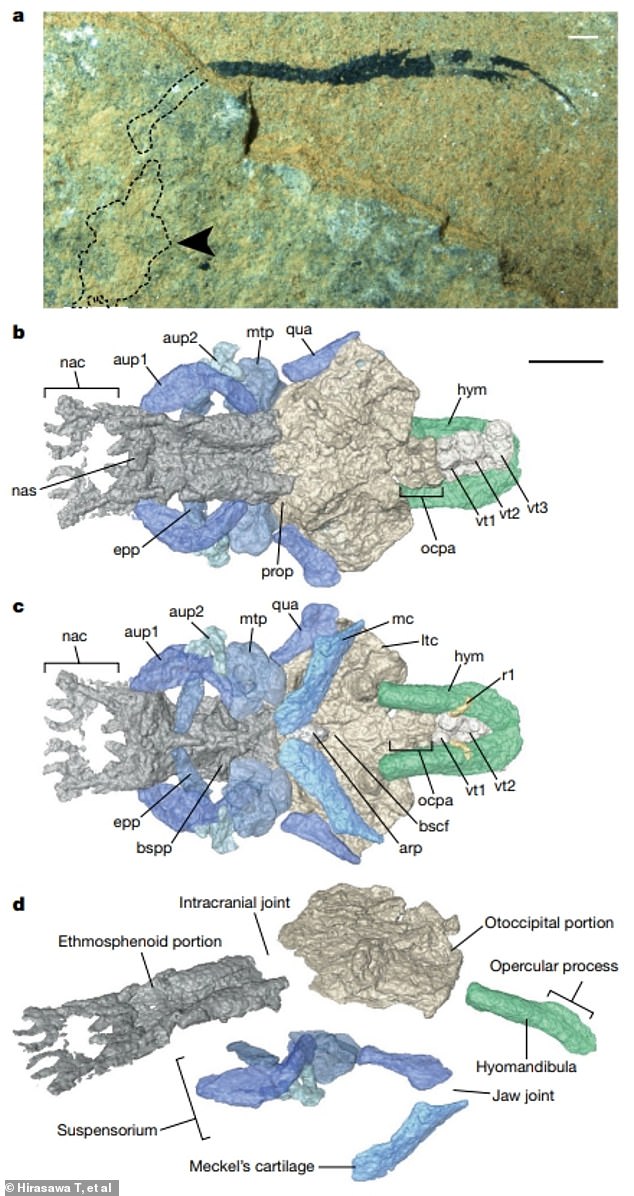 Teeth, dermal bones, and paired appendages are not associated with Palaeospondylus.

Professor Hirasawa said: “Whether these features were evolutionarily lost or whether natural evolution froze midway in the fossils may never be known.

“However, this development may have facilitated the development of new features such as limbs.”

Professor Hirasawa added: “The peculiar morphology of Palaeospondylus, which can be compared with the four-legged larvae, is very interesting from an evolutionary genetic point of view.

With this in mind, we will continue to study the evolutionary genes that led to this and other morphological changes that occurred in the water-to-land transition in the history of vertebrates.

How did we discover Paleospondylus?

Palaeospondylus fossils were first discovered in the bottom fisheries of Achanarras in Caithness, Scotland around 1890.

They were found by amateur paleontologists Marcus and John John – cousins ​​who live near the Akanara stone quarry.

Since then, other samples have been excavated at the same site with a few more found at two nearby sites.

This species is not known anywhere else in the world and is a unique example of the early life of fish on Earth.

The research was conducted with Dr. Daisy (Yoji) Ho at the Australian National University.

The doctoral graduate said: “This strange animal has puzzled scientists since its discovery in 1890 as a mystery that is impossible to solve.

Morphological comparisons of this animal have always been very difficult for scientists.

However, recent improvements in segmentation and high-resolution 3D visualization have made this previously impossible task possible.

“Finding a well-preserved specimen like the one we used is like winning the lottery, or even better!”

The new findings mean that scientists can unlock a range of unknown morphological features and evolutionary history of the four-legged animals.

“Despite investigation, it is still difficult to determine what the animal is with 100 percent accuracy,” Dr Ho added.

“Even with this new information, long-term investigations are needed with the combined effort of scientists from around the world to give us a perfect answer for what is actually Palaeospondylus gunni.”